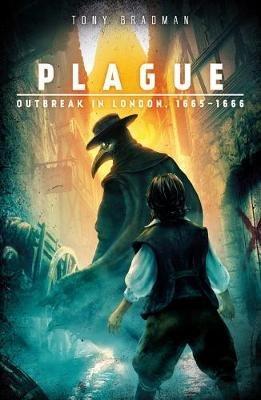 The children chose our class story from a selection. This is about a boy called Daniel who loses his family to the Plague then has to fight to stay alive in streets filled with corrupt doctors and criminals.

Finding out about the symptoms of the plague. Here we are dissecting buboes.
Using drama to understand the roles of different people during the plague.
The Searcher checks each house for illness
The Warder ensures people don’t leave infected houses
The shopkeeper cleans coins in vinegar
Families mourn their dead
Corpse Bearers take away the dead
Bodies were taken away to Plague Pits
We had some fun with drama this week, learning Shakespeare’s The Taming of the Shrew.

Once upon a time, there was a dark and stormy girl
Our term started by finding out more about wolves in the wild.
We used paints and silhouettes to create these ‘iconic’ wolf images. (Although we know that wolves don’t actually howl at the moon!)

The wolf moon also paid us a visit!

(The January Full Moon is often called the Wolf Moon)

We investigated how far away we could smell a mystery smell then learned that a wolf could have sensed it from 1.75 miles away! (The distance from school to the hospital).

We were then given a scent on a stick and had to find the rest of our pack using our sense of smell only. Every member of a pack can be recognised by their smell.

At the start of our story we found out that wolves were being kept as pets by “..People who lead elegant lives in thickly-carpeted houses in St. Petersburg..”. We decided to place ourselves in role as the wolves and write letters complaining to our owners about our treatment.
And some of the ‘owners’ wrote back!
The opening chapter of our story is dominated by a controversial character - General Rakov. We used the reading books to gather as much evidence about him as we could. We used this evidence to create character descriptions.
As Ilya and Feo head north, Ilya tells Feo about the things they will see in St. Petersburg. We decided we should explore the city ourselves so we opened Google Maps and looked up some of the city’s famous landmarks.  Some of the adjectives we used to describe St. Petersburg after our ‘visit’ included ‘spectacular’, ‘magnificent’ ‘awe-inspiring’ and ‘breathtaking’. Thinking that we should encourage other people to visit St. Petersburg, we wrote some persuasive travel brochures.
Learning the blanket stitch in DT.
In art, we have been working on our drawing skills. We learned about line and tone and experimented with different grades of sketching pencils.

Get ready to blast off with George to explore the universe!

We started this topic with our curious hats on.

Looking at images from space, we came up with questions we hoped to answer over the next few weeks.

At Reading time, we had time to ‘check out’ the space topic books.. but we were only allowed one minute with each book. There was some great conversation about the books and since we only had just enough time to find something interesting, but not enough time to read the book, we were eager to get our hands on the books later!
Art work by Peter Thorpe
As part of our launch sequence, we were amazed by  the art work of Peter Thorpe. We studied how he uses colour effectively and applied some of his ideas in our own work.
We worked hard on varying our sentences in writing to create our own launch descriptions.
We spent some time finding out about the history of space exploration and recognised the importance of Galileo and his telescope to science.
The first thing we experienced on our space journey, was the birth of a star. We used chalk to create pictures of colourful nebula then, in writing, described what we saw.
In our reading book, George’s Secret Key to the Universe, the super-computer, Cosmos, says “A comet is coming!” Our challenge was to find out what a comet is and write an information text.
As part of our comet study, we learned and performed a poem called ‘Comet’ by Kate Wakeling. The readers notes told us to read it quickly, taking as few breaths as possible! 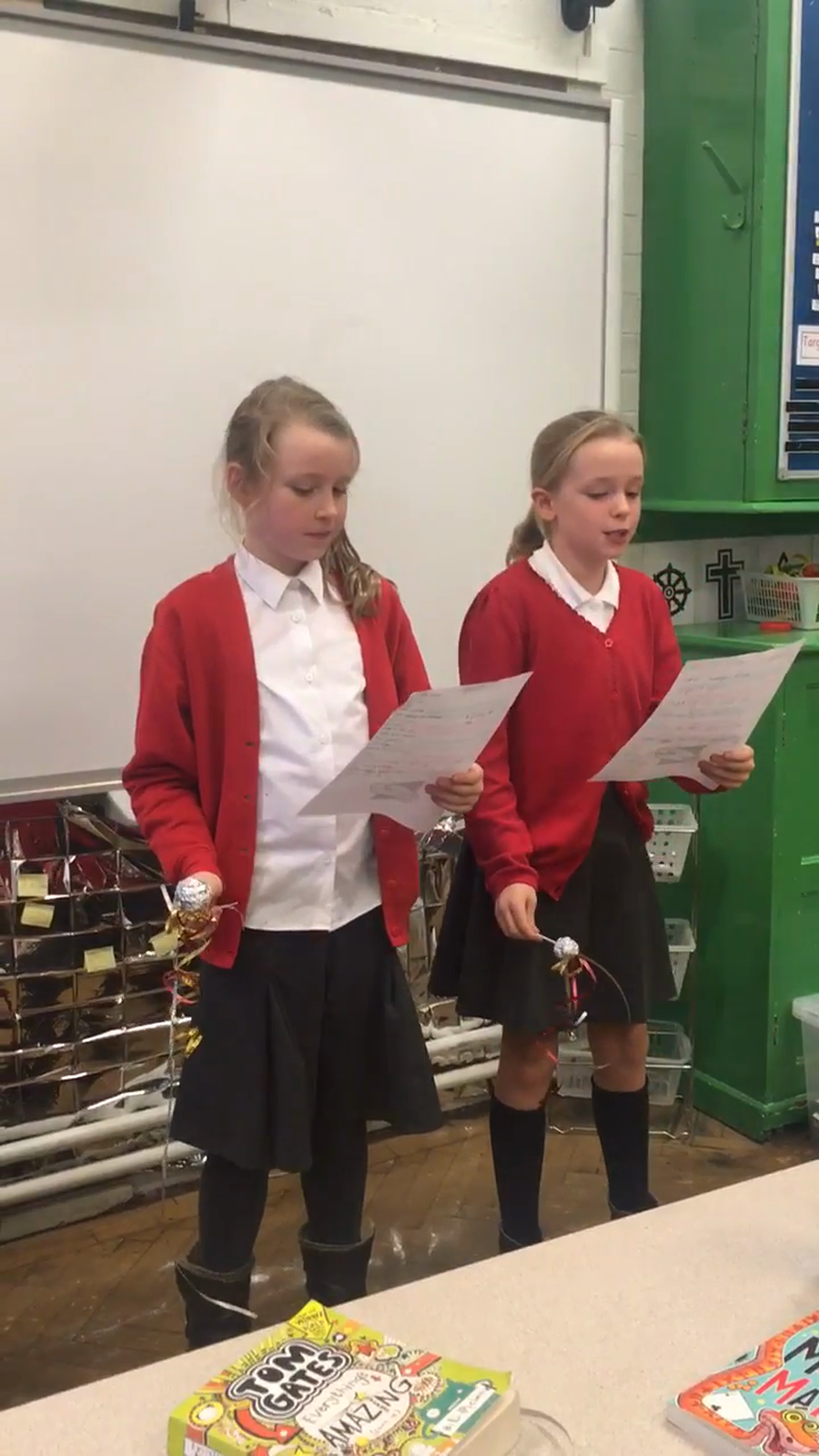 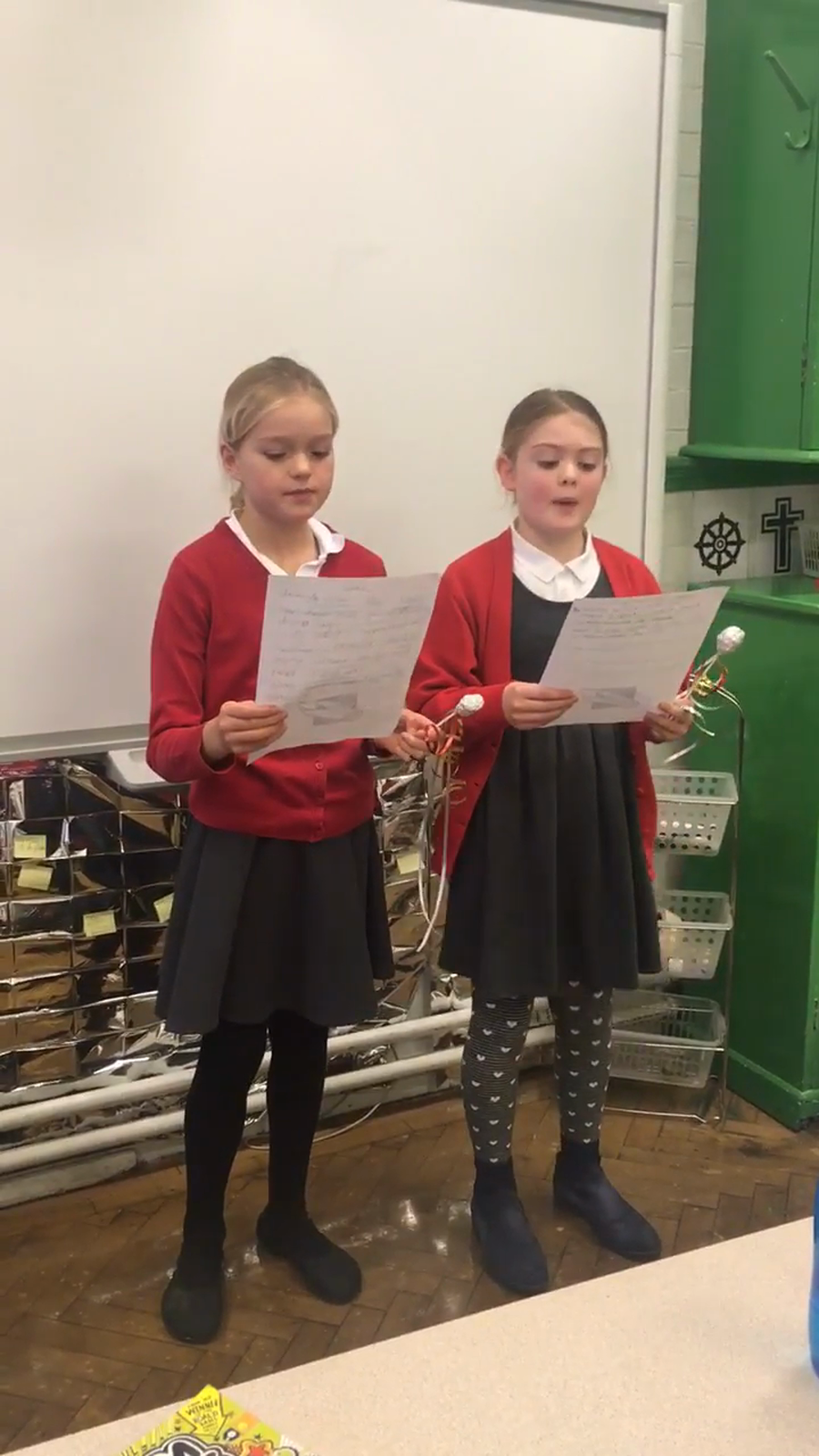 Finding out how the moon shines.

Our Extreme Earth topic began with a legend about a volcanic island. We wondered who the giant was and what he was stirring.   After some careful language study, we realised that the giant was the volcano and it was waking up!
The legend is set on a volcanic island in the Pacific Ocean. We used atlases and Google Earth to take a look at these 'countless thousands' of islands.  In writing, we had a go at writing complex sentences to describe the idyllic setting.
As we read the story, we noticed that there was only a picture to describe the volcanic eruption - no words! So we decided we should help the author by writing the words for this part of the story.  To do this we needed to gather some powerful verbs and descriptive adjectives.
We noticed that the people in the legend did not know how a volcano worked so we decided to find out for ourselves. We started by learning about the Earth beneath our feet.
Mrs. Roper told us that the Earth’s crust was not smooth and that we should peel our oranges to find out what it’s really like!  Each piece we peeled off represented a tectonic plate. When we put the peel back on the orange, we noticed how the tectonic plates fit around the Earth like a giant jigsaw puzzle.
Next, we discovered what happened as the tectonic plates moved. Using Oreo biscuits, we simulated what happens at the plate boundaries.
Convergent Boundary (plates collide)
Divergent boundary (plates move apart)
Transform boundary (plates slide side by side)
We learned that earthquakes often occur at Transform boundaries. Reading a story about the San Francisco earthquake of 1906 inspired us to write the opening to our own earthquake disaster story, set in school.
Look at the state of our classroom after the earthquake! (We’re hiding under the tables)
Investigating Seismic Waves

When architects design buildings, they try to make them in such a way that the building can resist an earthquake. They design them to bend and sway but not crack and fall.  Using toothpicks and marshmallows, we designed and built our own buildings.