Hello and welcome to Year 3 with Mr Cole!

This week, the children have carried on trying out things that Stone Age people may have done. On Tuesday, we build tripods and frames from sticks and string, thinking about how people may have used them to dry food or to cure leather in the past. We were quite glad that we had string to use as the more authentical animal sinew may have been unpleasant.

On Wednesday, we dimmed the lights and climbed under our tables to try out cave painting. We used charcoal, talking about how likely it was that some of the first every drawings were done with burnt sticks. The children had loads of other ideas of how to make natural pigment - berries, animal blood, flowers, etc. Below are some you could try at home, if you're feeling brave! I'd love to see the results if you do.

On National Poetry Day, we listened to various poems (Chocolate Cake by Michael Rosen was a favourite) and tried to adapt Wes Magee's Boneyard Rap to be more dinosaur-y. Have a listen to the original and see how we did. 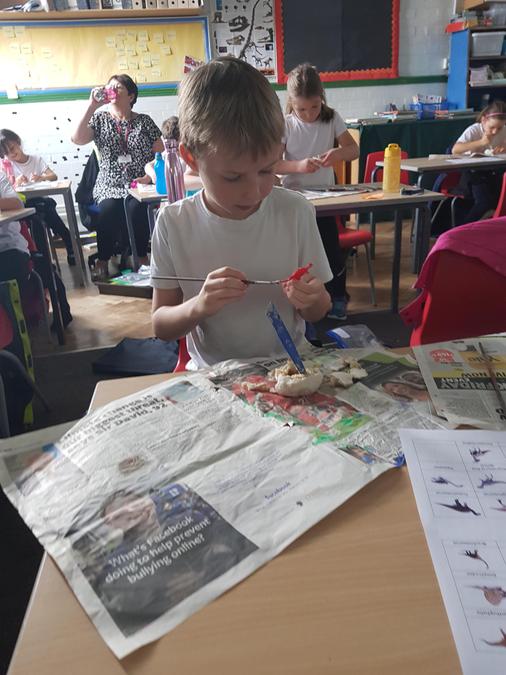 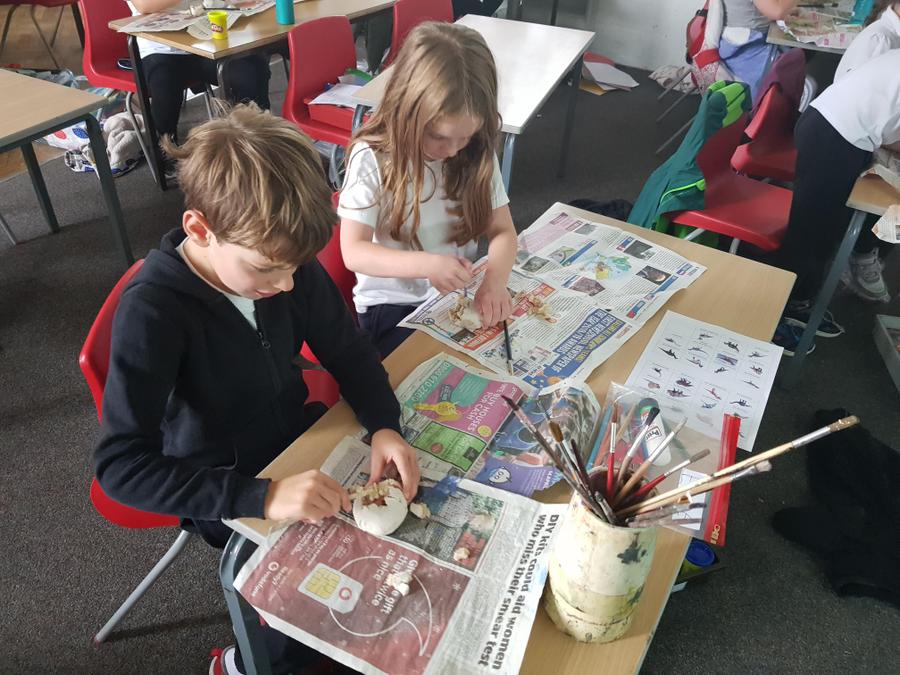 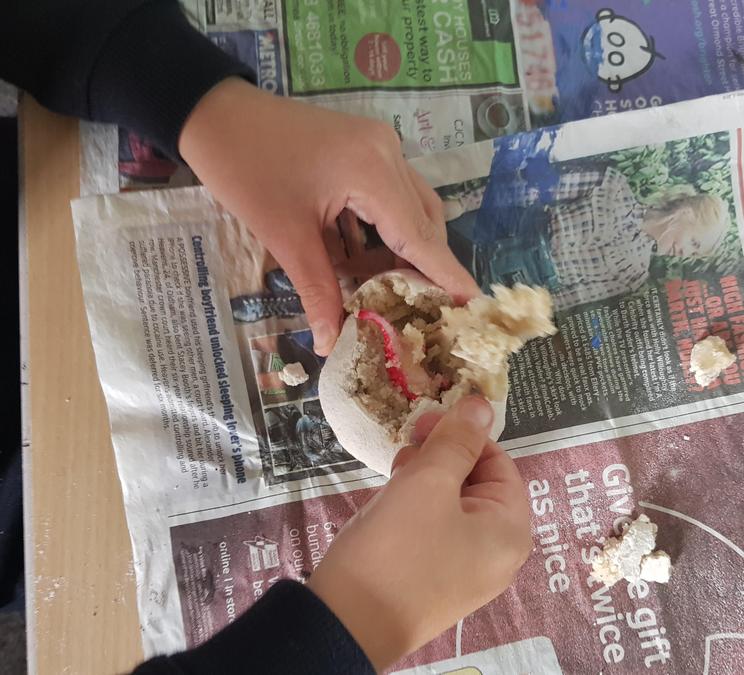 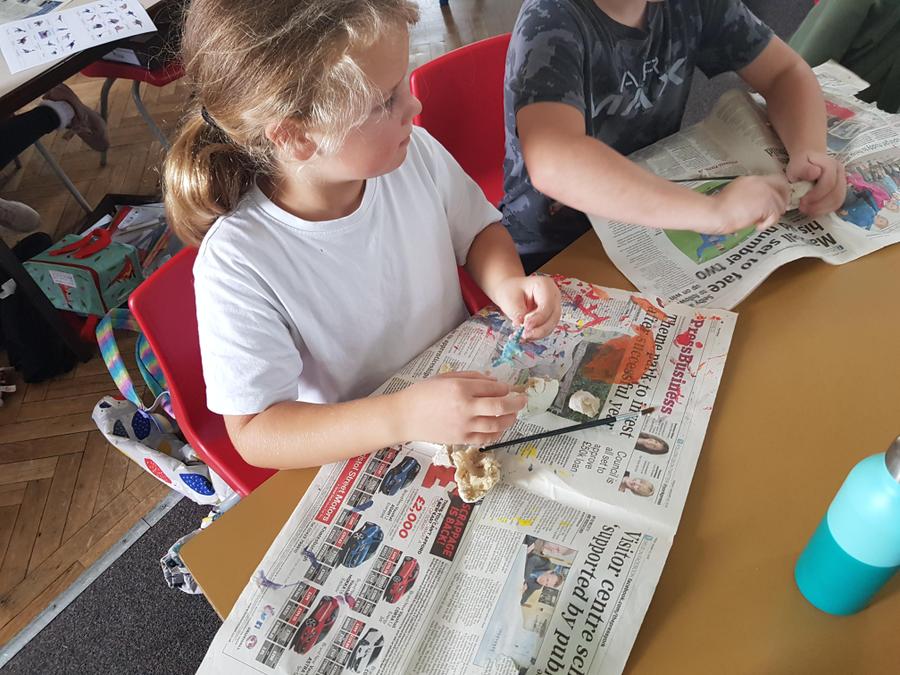 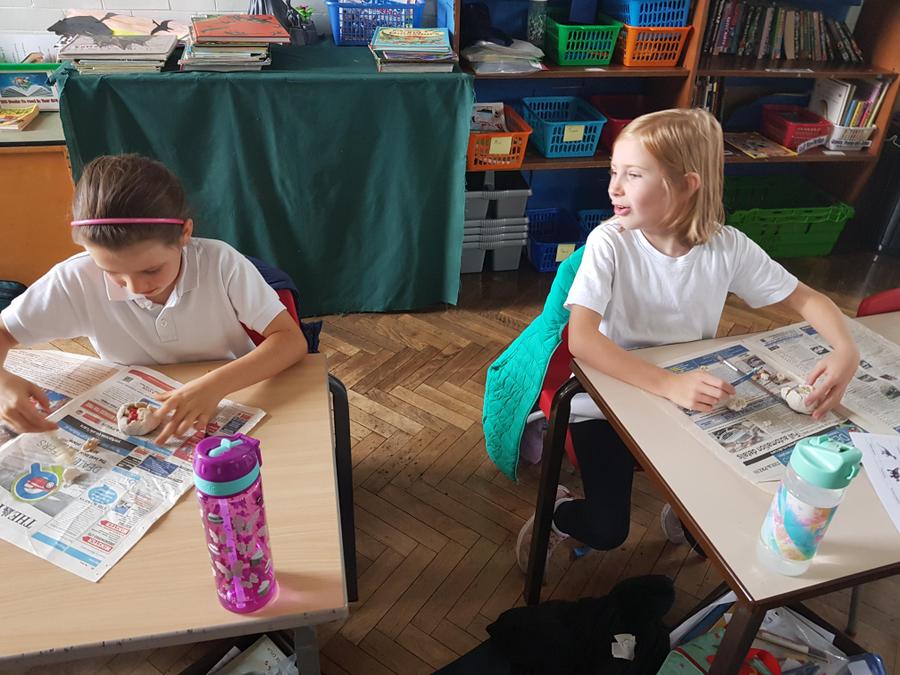 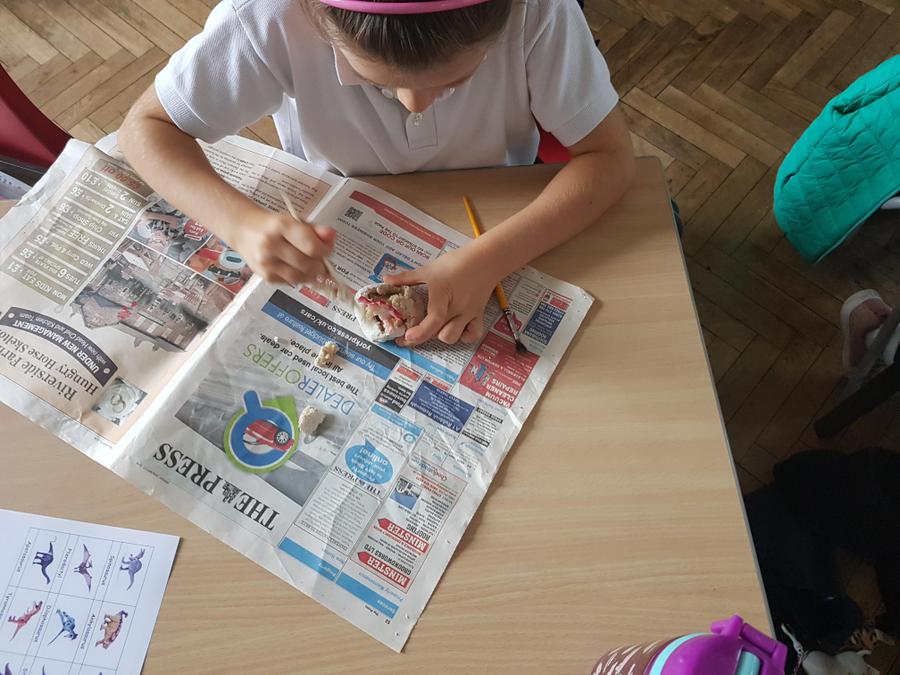 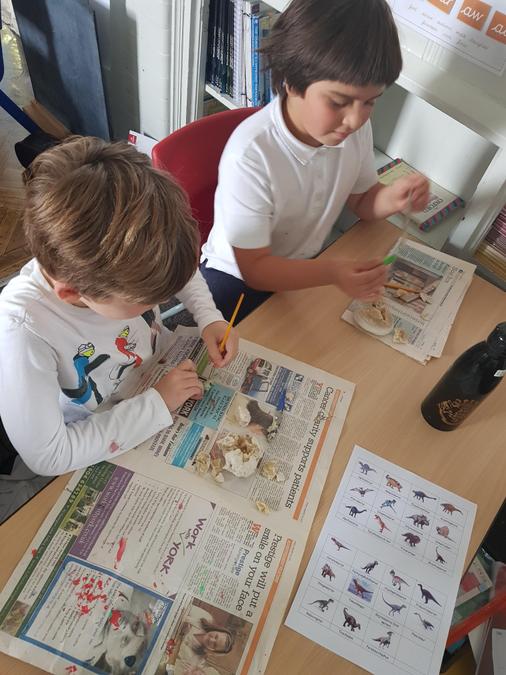 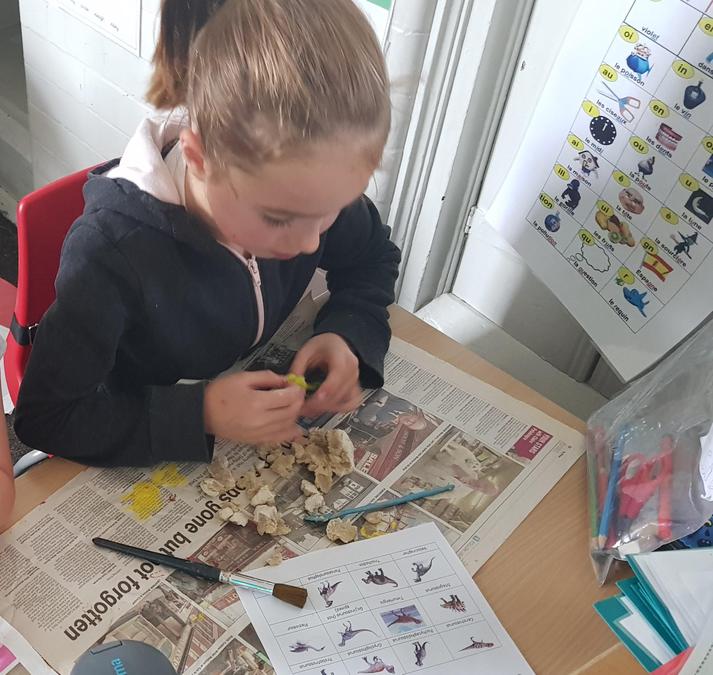 We used tool to extract fossils from the rocks that Mr Cole gave us. We tried to think like paleontologists (and not like the Hulk), being gentle with our tools. Later in the week, we'll look in more detail about how fossils were formed.

We can't actually have assemblies at the moment. For this year's big anti-bullying assembly, we watched a video from the Diana Award. We also talked about who can helps us with bullying (and whenever we're down), discussion who would make up our support network. I asked for a person in each finger and, as you can see, we came up with loads!

Science - Learning the Bones in our Bodies 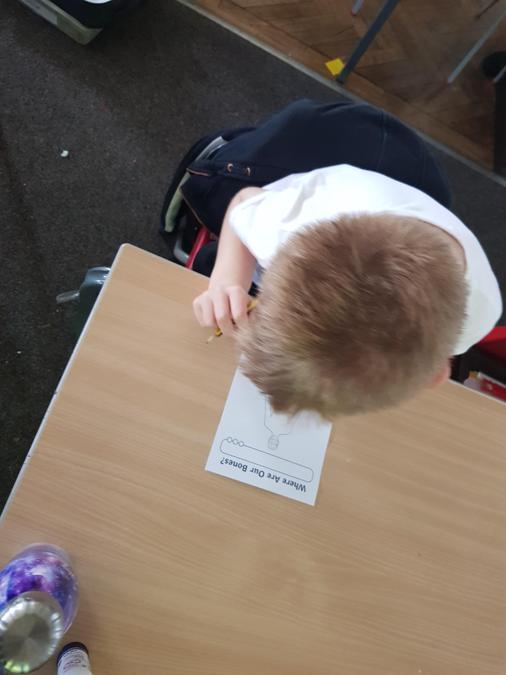 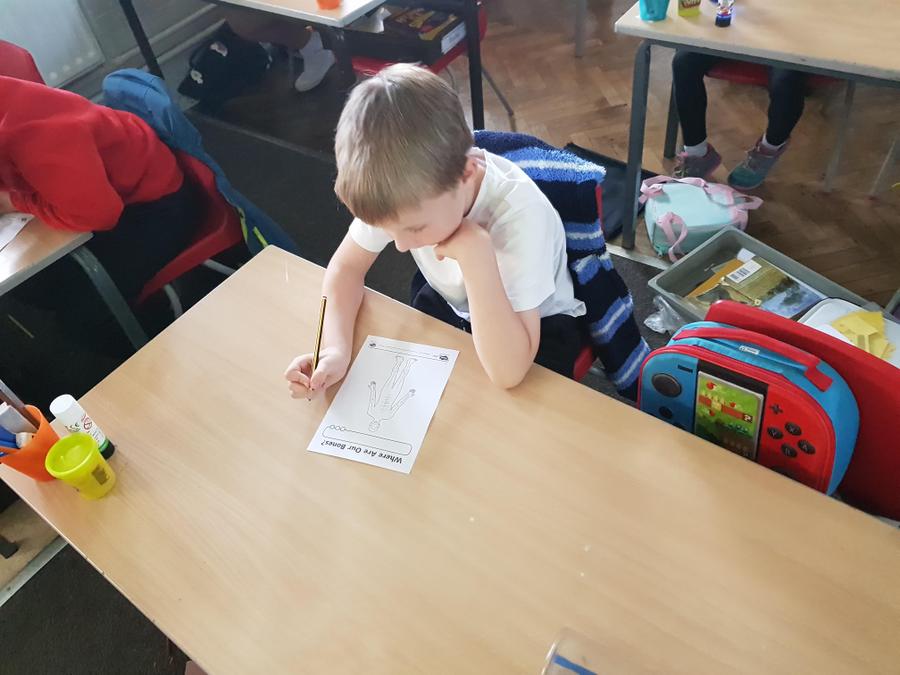 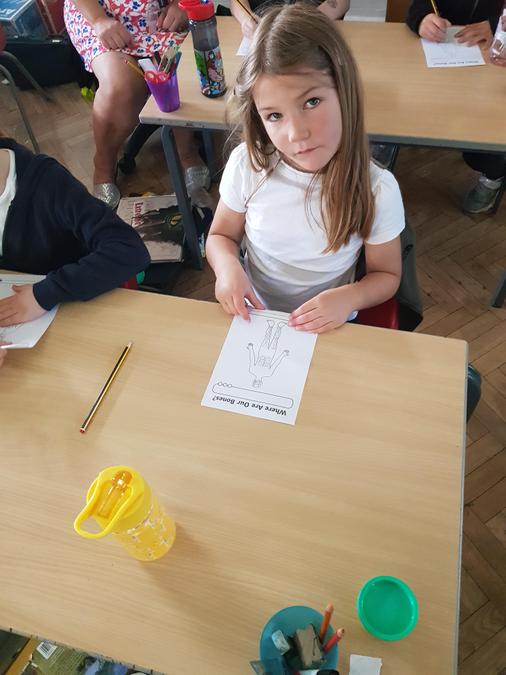 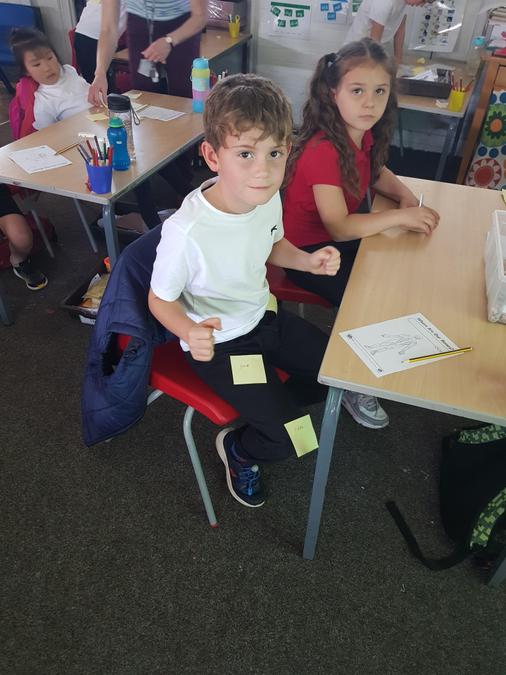 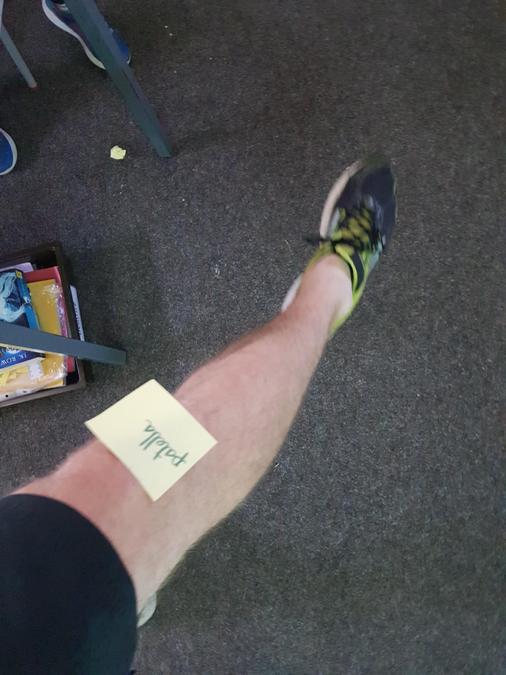 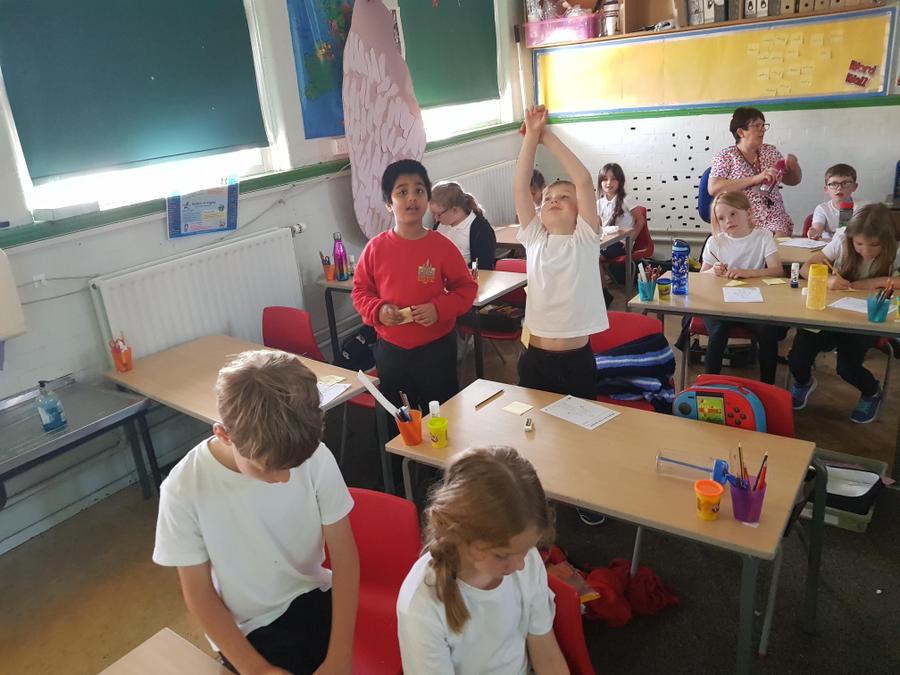 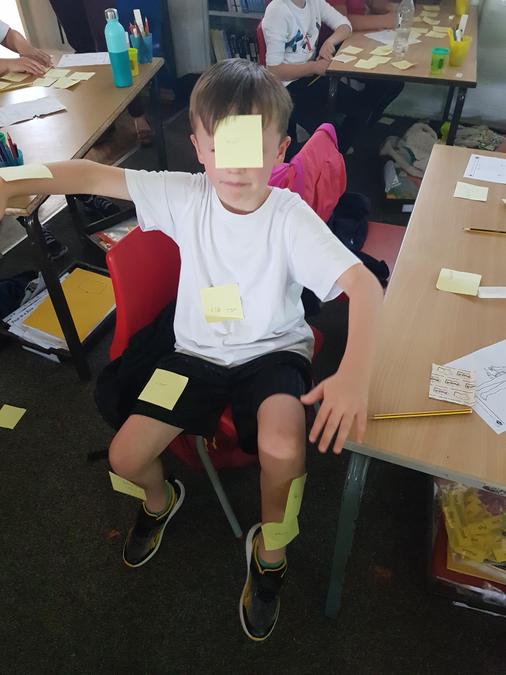 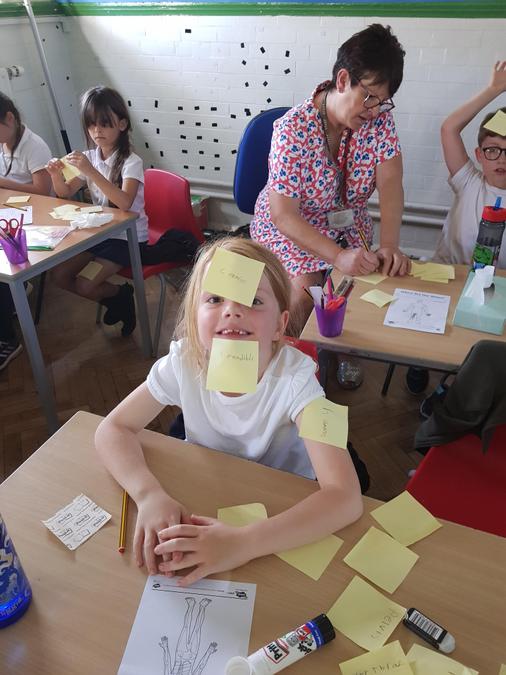 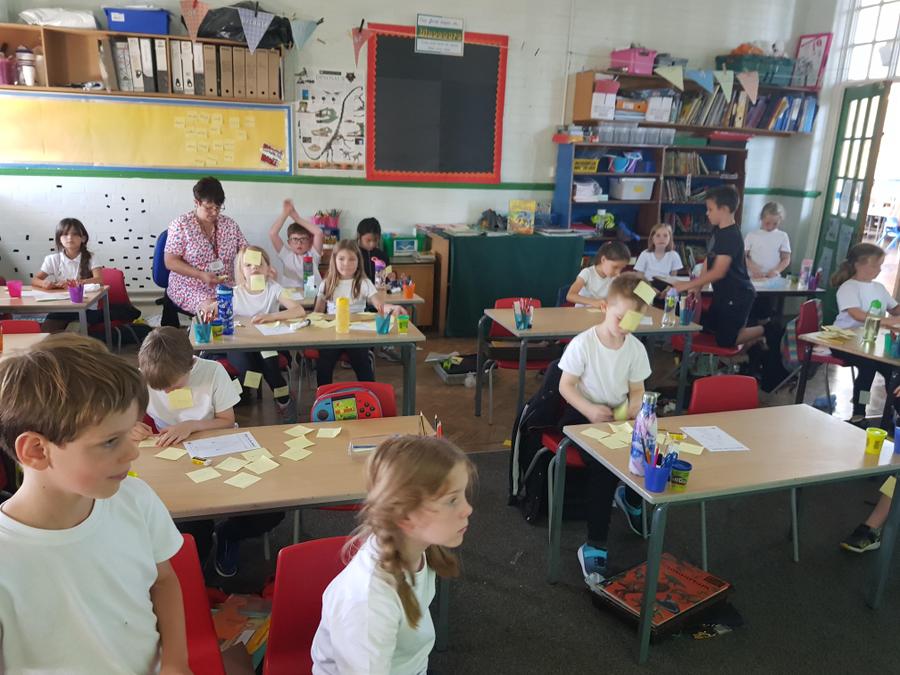 Later in the week, we are going to compare dinosaur skeletons with our own. I wanted to see if the children could start to learn some scientific words to name different bones. We started by working out which bones the children already knew then tried to pick up a few new terms. We used post-it notes to help us "say, spell and stick" each new word.

History - How long ago were dinosaurs alive? 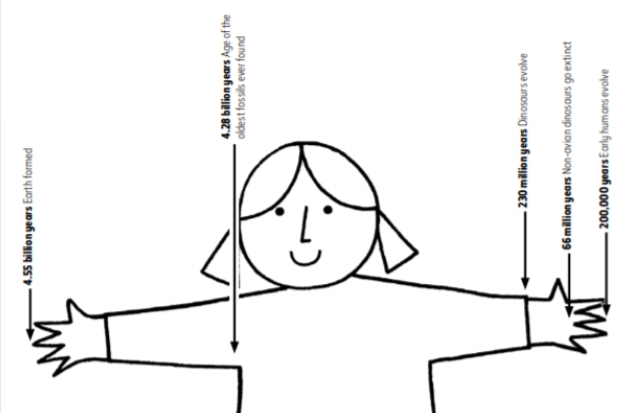 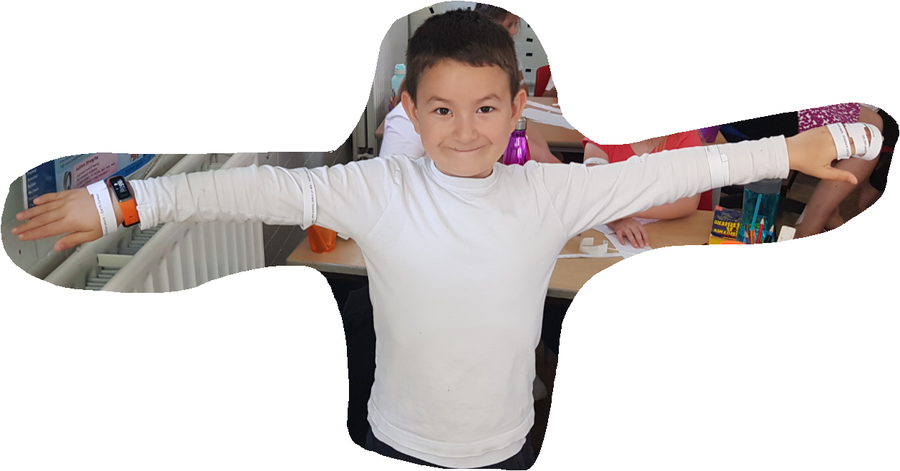 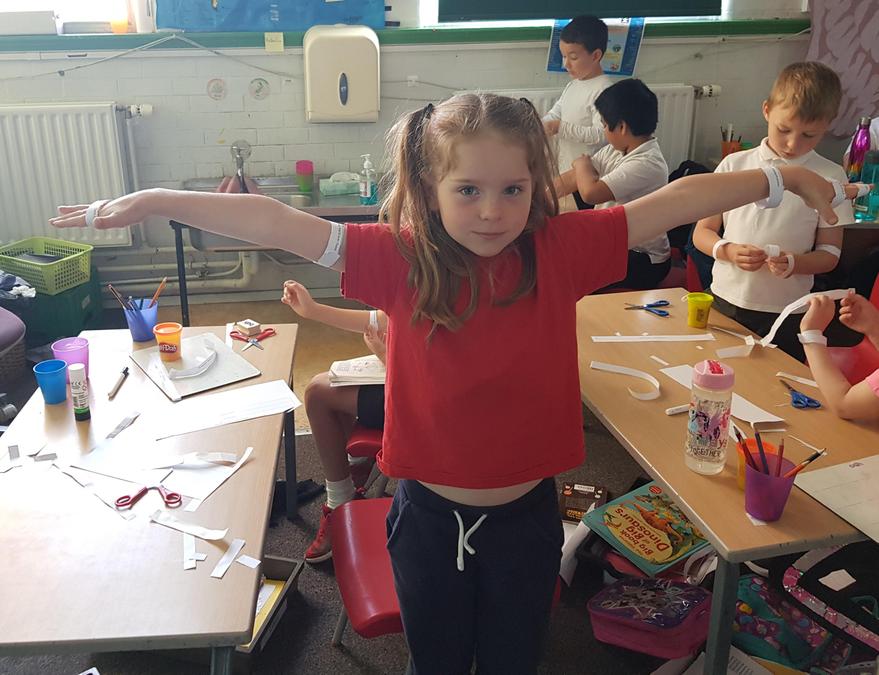 In order to gain a little more understanding of just how long ago dinosaur were alive, we tried to turn ourselves into timelines (spoiler alert - this was tougher than expected!). The main takeaway was to understand that dinosaurs and people make up only a tiny part of the Earth's history.

We also made a timeline from string that was to scale. the first 0.5cm was the entirety of human history. The first dinosaurs were 5.75m away. Even the dinosaur extinction was 1.65m away from people. 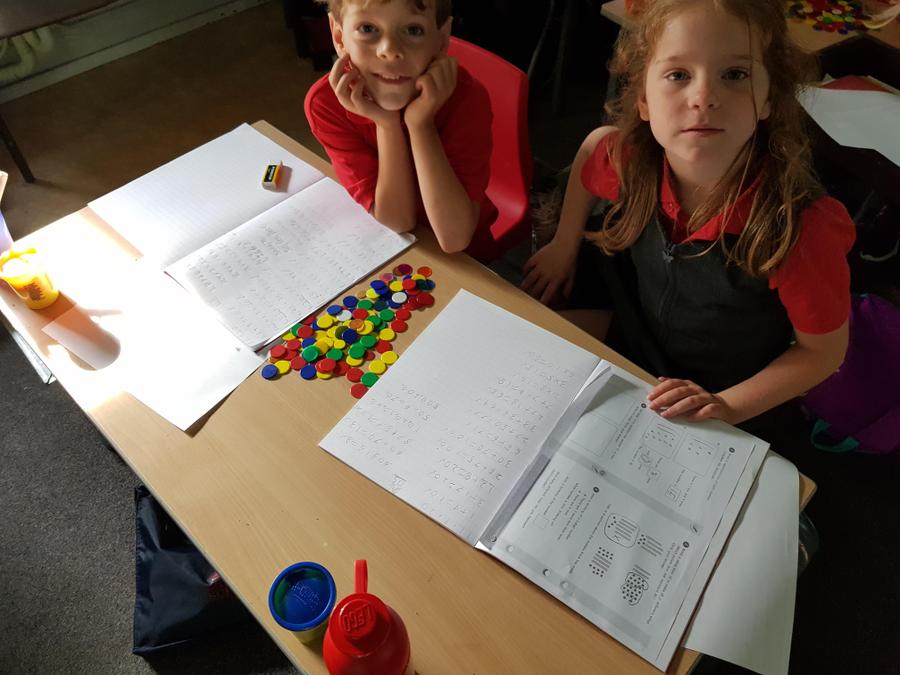 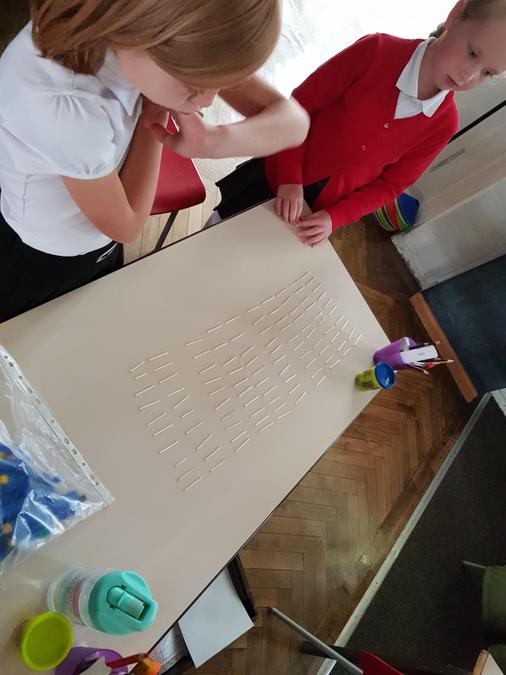 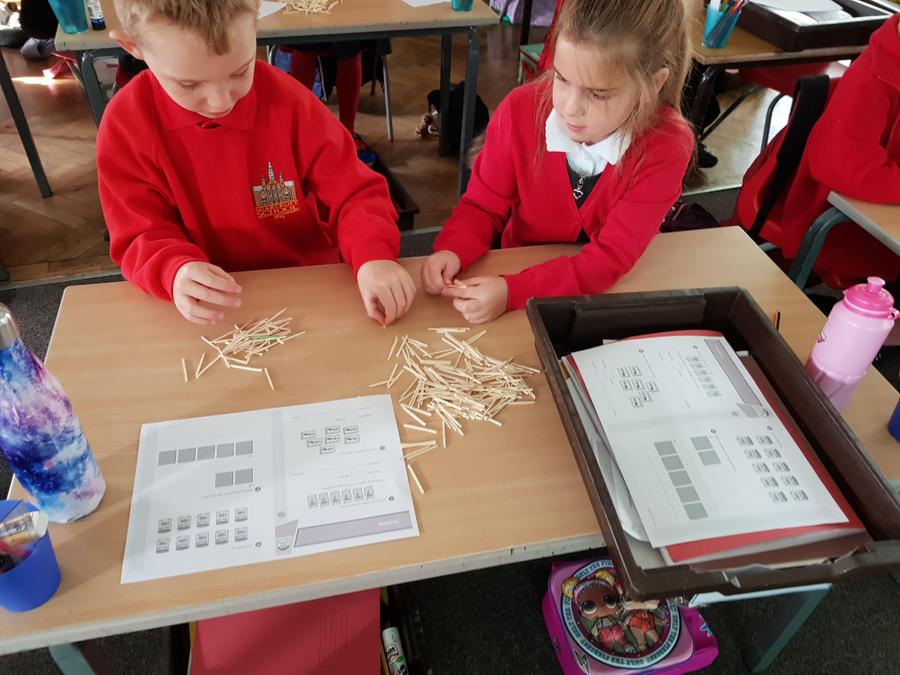 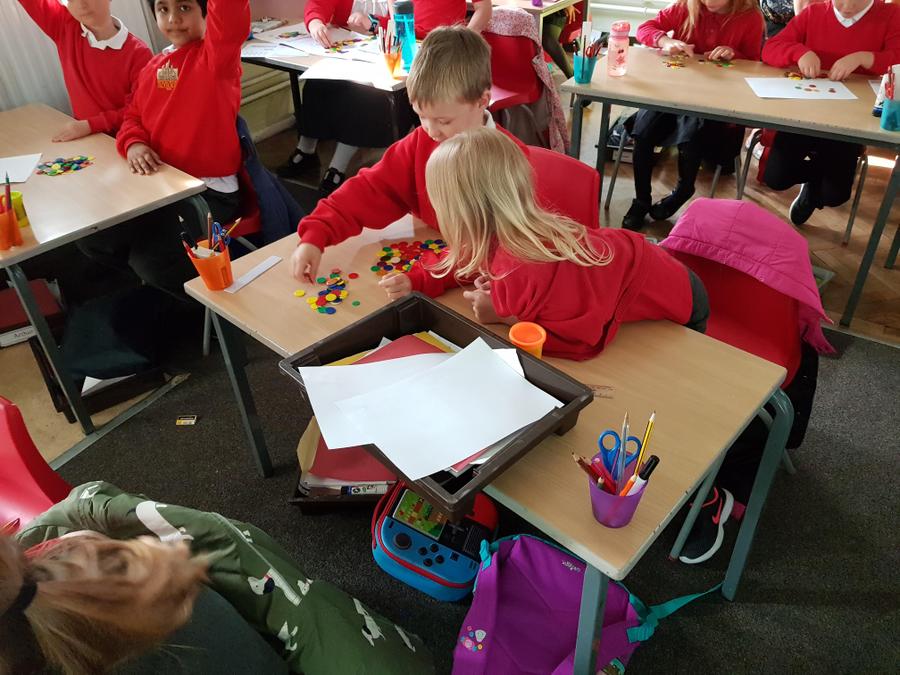 While working on place value in Maths, we have started to look at three digit numbers. I wanted the children to have a proper feel for what 100 looks like so we played around with different objects, counting out 100 of them. Every pair initially counted a single pile before we decided to make groups of ten. I wonder what 1000 would look like...?
Top
Cookie information
Cookie Notice