Tournament (only for those selected for the team) - Wednesday 29th April 4pm, Manor School

After practising and honing our gymnastic skills all term our team of six gymnasts were ready for this annual competition. Special mention to Tulsi who was ill on the day of the competition,but had been selected for the team for her hard work in learning the routines.

Six teams, including Scarcroft, took part in the event held at Manor School. The competition consists of three routines: Body Management, Floor and Vault. Mats were laid out and judges were ready to score us each individually.

Olivia completed her routines calmly and confidently, Tom's performance showed how much effort he had put into practising and Noah did the school proud in his first inter-school sports competition. Tayla smiled through her routines, Daisy-Belle showed great shape and form and Brooke mastered her nerves to get high scores.

Tentatively, we awaited our scores being combined together then compared with the other schools. It was very tight on scores within the top three but we were thrilled to find out that we had won! Congratulations to the team and their families - what a great day!

Our Year 5/6 Athletics team were made up of 30 pupils across Year 5/6. They performed brilliantly in the first round with lots of first and second places in both track and field events to snare us lots of points. Unfortunately, we lost out to Robert Wilkinson on the night, however we were able to qualify for the final as the best runner up. The final was nerve wracking and again we had lots of points scored. Our aim was to do better than our total in the first round. We gained 10 points but unfortunately were not able to get enough points to beat Robert Wilkinson or AYJS who came in 1st and 2nd. We finished 3rd overall out of 36 schools who took part in York and we were very pleased with the result!

Another great tournament with an enthusiastic team, many of whom hadn't had previous experience of playing netball so it was great to give them the opportunity to get to know the game.

Overall we scored four goals and rotated our position as goal shooter.

Darcey was great at finding space and Julia Z made some great defensive moves. Eva learnt how to pass and defend quickly and Oscar gave plenty of options. Julia T-G gained in confidence and Akshara learnt to play as part of a team.

Thank you to the team for their superb effort, and for the parent's support, which is always lovely to have.

Our KS2 netball team showed some great skill throughout their matches. There was some fantastic attacking movement from Elsie, Lucas, Eleanor and Ida and some great defending from Jasmine, Will M and Bethany. Our star shooter on the night was Charlie Taylor who helped us with our win. Our results were a win, a last second loss and a draw which meant we finished 3rd in our group. We were pleased with our performance despite the result.

It was a busy tournament and the team played three matches back-to-back against St. Aelred's, Carr Infants and St. Wilfrid's.

Brooke scored our only goal, supported by Daisy-Belle who moved around the field in different positions. Wilf positioned himself well and had a chance on goal. Arthur played consistently and got stuck in with tackles. Goals were saved competently by Reuben and Finlay and Leo was an all-rounder, who was strategic in his play.

The team worked really well together, put in maximum effort and listened carefully - a credit to the school. Plenty of parental support saw the team lose all three matches, but such was the spirit of play that many of the team stayed to watch the thrilling final between Carr Infants and Dringhouses.

The tournament resulted in a draw, meaning the two schools share the trophy on this occasion.

Close matches and an improvement in play over the course of the tournament were the main positives we could take away.

Four York schools played in the KS1 Hockey tournament, which meant 3 back-to-back matches for our squad of five Year 2s. Having a rolling substitute kept them going and they gave all their energy to their games.

Barney played well across the whole pitch, but focused on a position in goal. Arthur put in some great tackles and kept skilled control of his hockey stick. Julia and Tabby were both excited to play and got stuck in with tackles and attempts on goal. Oscar developed his grip and control of the hockey stick in his defensive role and enjoyed being part of the team.

We had three tight matches, with two draws and one loss; putting us in joint 3rd with Dringhouses. Knavesmire came 2nd and Bishopthorpe came 1st with 6 points.

Overall, the team worked well together, had fun playing Hockey and developed their sporting skills.

Big thanks to parent support, and to Mr Pope for organising, it certainly inspired the team to try out for more tournaments this year. 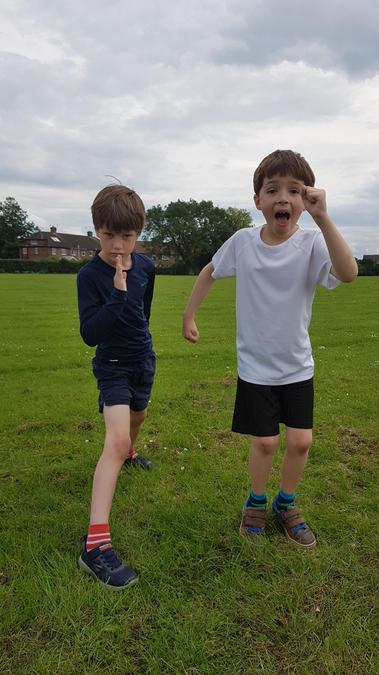 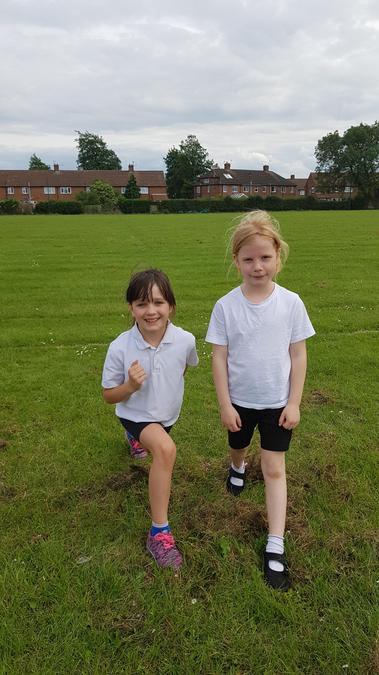 They were supportive of each other, listened carefully to the instructions and rules, and prepared well for the competition. They didn't place in the boys' or girls' races but were an absolute credit to the school.

Thank you for taking part Henry, Nate, Sofia and Zuza!

Our team of four were well prepared and enjoyed this well structured tournament. They each got to play four singles matches and we came 2nd in the first round out of ourselves, Dringhouses and St Aelred’s, with St. Aelred’a going through in top position to the final round.

In our final round we played Rufforth and St Wilfrid’s.

Amelia managed a win against tricky opponents and Amelie used her own racket to serve consistently. Seb returned well and played very sportingly. Daniel got a couple of wins, mainly due to serving some aces.

Well done to all, a great afternoon in windy conditions.

Our Year 3/4 cricket team qualified for the County Final earlier in the year. After the tournament was rained off twice, we finally got a beautiful day to play at Knaresborough Cricket Club. The team got off to a good start with some excellent batting and bowling but lost their first game against Nawton 282-256. The next game against Ings Farm saw our team get into their stride with a 155-146 win. We lost our 3rd game against Marton cum Grafton 178-143 but won our final game against St Joseph’s 172-164. Our results meant we finished 3rd in our group which we were delighted with. This is the first heat a Scarcroft Cricket Team have ever got and we look forward to playing in the Year 5/6 tournament next year.

A team of Year 4 pupils represented the school at the York (West) Schools’ Cricket Tournament. They got off to a fantastic start against St Paul’s Primary School with a win and followed this with a great win against Our Lady Queen of Martyrs. They worked fantastically as a team and all pupils put in a great performance with lots of wickets and fours!

Their two wins meant they qualified for the  semi-final against Archbishop of York Junior School. Again, the team put in a fantastic performance getting lots of players out and gaining a great amount of runs which finished at a total of 273 to AYJS’ 208. This meant that the team then qualified for the final.

The final was played against Rufforth Primary School. It was a close game with lots of nerves from staff and parents in the sideline but the team won 230 runs to 195.

It was a fantastic day which ended with a brilliant 1st place. We look forward to competing in the County Finals later in the year.

Our Year 5/6 Cricket Team were in great form at the annual York (West) Cricket Tournament. They lost their first game against St Paul’s  but won their second match against Our Lady Queen of Martyr’s with the team catching 7 balls to get 7 players out. They worked brilliantly as a team but unfortunately did not make it through to the semi-final as it came down to runs!

Well done to all those who took part.

This fantastic event at York Sport involved a swim, a bike ride and a run. The children all tried really hard, listening carefully to the instructions and doing really well in their transitions. Luckily it was a hot day and we soon dried off after the swimming during our outdoor picnic.

Most of the team enjoyed the swimming best and found the cycling the hardest, but everyone received a medal and should be proud to be part of such a great event.

If anyone is interested in taking part in the Yorkshire Junior Triathlon series outside of school follow the link below (8+ years).

The annual Peter Feasby Hockey Tournament took place on 27th March at Vale of York Academy. Scarcroft were able to enter 3 teams and there was much excitement on the night with so many pupils there supporting each other.

Scarcroft 3 showed great tenacity. Despite losing their 3 games, they didn't give up and worked better as a team with each performance. Special mentions go to Skylar Fox-Gillett, Eleanor Tummons and Ida Mason in this team who worked their socks off!

Scarcroft 2 were in a very close group and played some very exciting matches. They drew 2 games and unfortunately lost their final game. They finished 4th in their group. Special mentions go to Jasmine Hirst who was incredible in defence and Arthur Kay for never stopping!

Our Scarcroft 1 team won one, drew one and lost one resulting in a 3rd place finish in their group. Special mentions go to Charlie Taylor and Ellie Scrase for bossing it in defence, Will Muskett for superb tackling and Poppy Kay for bouncing back after her 3rd Scarcroft Hockey Tournament injury!

Well done to all teams. It was a great night of hockey.

Tuesday 26th March saw 5 of our KS2 pupils represent York in the North Yorkshire Cross Country Final at Dalby Forest having qualified in Autumn Term. The pupils had a great time despite the cold weather! Two of our pupils were returning for their final time in Year 6 and 3 pupils were representing York for the first time. Whether returning or debuting, it is a great achievement to represent the city.

Results on the day:

On Wednesday 13th March two teams of Year 5/6 pupils were in action at Energise Sports Centre. The tournament was a development tournament which allows pupils who have not represented the school in a sport so far this year, the opportunity to do so in a fun and friendly tournament. Street basketball is played which means that both teams are shooting in one hoop resulting in high energy matches.

The pupils really enjoyed representing their school and got better as the tournament progressed with their teamwork and ability. Thomas Baynes was great at using space and calling for the ball and Leila Elliff got stuck in as soon as the whistle went! A very enjoyable tournament.

Harry and Kitty both got high scores on the vault, landing confidently, whilst Poppy and Zoe's hard work practising the floor routine paid off.

Elliott impressed in all three events, showing good extension and Anna and Ella's knowledge of technical terminology helped them to perfect the different sequences. Esther watched carefully and adapted her moves to the space, gaining good scores.

The team came second with an overall score of 104.5, beaten by Poppleton Road with 109.

Well done to the whole team for practising so hard and for putting in their best effort despite nerves on the day. Thank you to the families for being fantastic supporters.